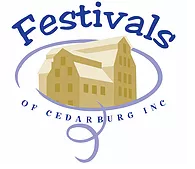 Festivals is a 501(c)3 non-profit organization who's mission is to plan festivals and events in the City of Cedarburg which enhance the vitality and economic well-being of the City while fostering civic, cultural and educational interests. The vitality and energy of Historic Cedarburg’s downtown shopping district has been enhanced by well-attended annual festivals. Begun in 1973, Winter Festival and Wine & Harvest Festival have been
successful in bringing thousands of visitors and residents alike to celebrate the charm and beauty of this beautiful downtown, named to the National Historic District in 1986. In 1985, Strawberry Festival was begun, while in 2005, the first Cedarburg Cycling Classic was undertaken and in July, 2008 the first annual German Festival, now known as Oktoberfest joined the list. In 2013, A Cedarburg Christmas was added to the line of up family-friendly entertainment.